Doctor-formulated to provide the nutrients most well-known to positively impact sperm motility.

When you and your partner are trying to get pregnant, it is not enough for you to have lots of sperm – you also need sperm that can swim powerfully to meet the egg. Motility Boost is designed specifically for men with low sperm motility, which along with low sperm count represents a leading cause of male infertility. MotilityBoost is not a standalone product, but rather it is designed to be taken along with FertilAid for Men.

MotilityBoost is designed specifically for men who have been determined to have low sperm motility, typically by way of a semen analysis (SA) conducted by a Doctor

I’m Already Taking FertilAid for Men. Do I Also Need to Take MotilityBoost?

FertilAid for Men is a comprehensive male fertility enhancing supplement, designed to help increase sperm count and improve sperm motility and morphology. We recommend FertilAid to all trying-to-conceive men to help ensure that the “raw materials” for healthy sperm production are available to the body, and specific antioxidants are present to help prevent oxidative stress.

If, however, you believe that low sperm motility is a primary issue impacting your fertility, or if you have had a semen analysis (SA) which indicates low sperm motility, you may consider taking MotilityBoost in conjunction with FertilAid for Men.

What are the Ingredients of MotilityBoost?

Coenzyme Q10 (Ubiquinone): Coenzyme Q10 (CoQ10) is a lipid-soluble antioxidant important in mitochondrial bioenergetics and found in seminal fluid and seminal plasma. CoQ10 has been found to improve sperm count and motility on asthenozoospermia. In one study, infertile men with reduced sperm motility were supplemented with CoQ10 for 6 months. Semen analysis was performed at the beginning of the study and again after 6 months of treatment. The results showed that oral CoQ10 supplementation increased CoQ10 levels in the seminal plasma and in sperm cells, which correlated to a significant increase in sperm motility. Another study supplemented CoQ10 or placebo in 212 infertile men with oligoasthenoteratospermia for 26 weeks. The results of the study showed that sperm density and motility significantly improved with CoQ10 treatment. Additionally, CoQ10 treatment duration was associated with sperm motility, sperm count, and sperm morphology.

N-acetyl-cysteine (NAC): Reactive oxygen species have been shown to reduce sperm motility. Antioxidants including NAC have been shown to reduce reactive oxygen species and prevent damaging effects such as reductions in sperm motility. In one study, 120 infertile males were treated with NAC or placebo for 3 months. The study showed that compared to the men in the placebo group, the men receiving NAC supplementation had improved semen volume, motility, and viscosity. Additionally, NAC treatment resulted in increased serum total antioxidant capacity and decreased total peroxide and oxidative stress index compared with the control group.

Quercetin: Quercetin is a potent antioxidant that has been shown to have beneficial affects on several sperm parameters. Studies indicate that treatment with quercetin for 14 days results in a significant increase in sperm motility, viability and concentration. Researchers suggest that quercetin may affect sperm quality through the stimulation of the sex organs, depending on the dose and the duration of treatment.

Arginine: Arginine is a precursor of several compounds thought to play a role in sperm motility, including putrescine, spermidine, and spermine. Additionally, oxidation of arginine generates nitric oxide, which is also believed to play a role in fertility. L-arginine supplementation has been shown to increase sperm motility and sperm count in infertile men with oligospermia and asthenospermia. In one study, researchers investigated the effect of supplementation with L-arginine in healthy males, males with diabetes, and males with idiopathic asthenozoospermia. The study showed that men with asthenozoospermia have lower levels of spermidine in the seminal plasma and diabetic males have lower levels of both putrescine and spermidine. In vitro treatment with L-arginine resulted in increased sperm motility in men with diabetes as well as the men with asthenozoospermia.

L-Carnitine: Carnitine is important for the development of spermatozoa, as it acts as a source of energy in the epididymis, improves sperm motility, and plays a role in sperm maturation. Research indicated that infertile men have lower levels of total carnitine in the seminal plasma compared to healthy men, particularly among men with decreased sperm motility and sperm count. Furthermore, there is a direct correlation between carnitine levels in the seminal plasma and sperm motility, vitality, and concentration.

Mucuna Pruriens: Mucuna pruriens has been shown to improve sperm quality, including sperm count, sperm viability and motility, and reduce morphological damage and the number of sperm with cytoplasmic remnants. 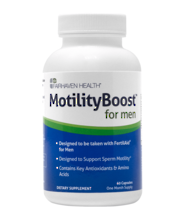 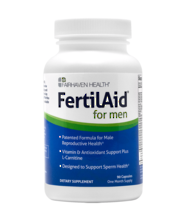